Nurses all over the world need more knowledge and training when it comes to treating refugees and asylum seekers. The needs of these patients can vary greatly and therefore must be identified and articulated much more clearly than is the case today. This was one of the conclusions of the fifth ETNA Conference of the European Transcultural Nursing Association, which took place in Odense in June.

One hundred and thirty participants from 20 different countries made Lecture Theatre 100 at the University of Southern Denmark sizzle and bubble like a volcano in an eruption of enthusiasm, joy and tears. Meeting colleagues, listening to fascinating papers and real-world stories and relaxing with international entertainment brought the participants together in the knowledge that they face the same challenges all over the world.

War and poverty force millions of people to flee their homes, and this places new ethical and methodological demands on nurses. How, for example, should visiting home nurses conduct themselves in homes with major language barriers, cultural differences and varying expectations? How can the nurse provide the best possible service in a complex healthcare world? A number of participants expressed the view that the key is more education on ethnic issues.

Dorthe Nielsen (right) together with Professor Rena Papadopoulos from Middlesex University. She has been working with these issues since the 1980s – and the challenges have not diminished

The voices of ‘others’

The conference host, nurse and associate professor at the University of Southern Denmark Dorthe Nielsen (Migrant Health Clinic, Odense University Hospital), put the programme together in collaboration with the Professional Society for Transcultural Nursing of the Danish Nurses’ Organization, and ETNA’s scientific committee. For Dorthe, it was important that the refugees’ own voices were also heard at the conference: it’s not enough to discuss these issues on behalf of others in an academic forum. So, for example, she invited a mother and daughter from Syria, who described their escape from the war-torn country. They simply couldn’t stay in their home country because the family refused to join any of the warring groups and the father, who sadly died earlier this year, was imprisoned several times. “In addition, they were Christians, which in itself is dangerous. The family is privileged because they had enough money to escape together, and they have since made a good life for themselves through work and education. But they are in a minority,” says Dorthe Nielsen. Some refugees encounter major language problems. The nurse Nastea Ali told delegates how she served as an interpreter for her mother, brother and the rest of her Somali family in Denmark when she was only six. This gave her a special status even as a young girl, but also far too much responsibility, as she had to describe the family’s illnesses and financial and social problems to doctors, nurses and authorities. “As nurses, a story like this forces us to reflect on how we use children as close collaborators and resources in a healthcare context. This is just one example of why we need more political will and insight. I’m therefore very pleased that the Danish Nurses’ Organization is calling for the needs of new Danes to be identified and expressed much better than they currently are.”

From medical records, reports and research to practice 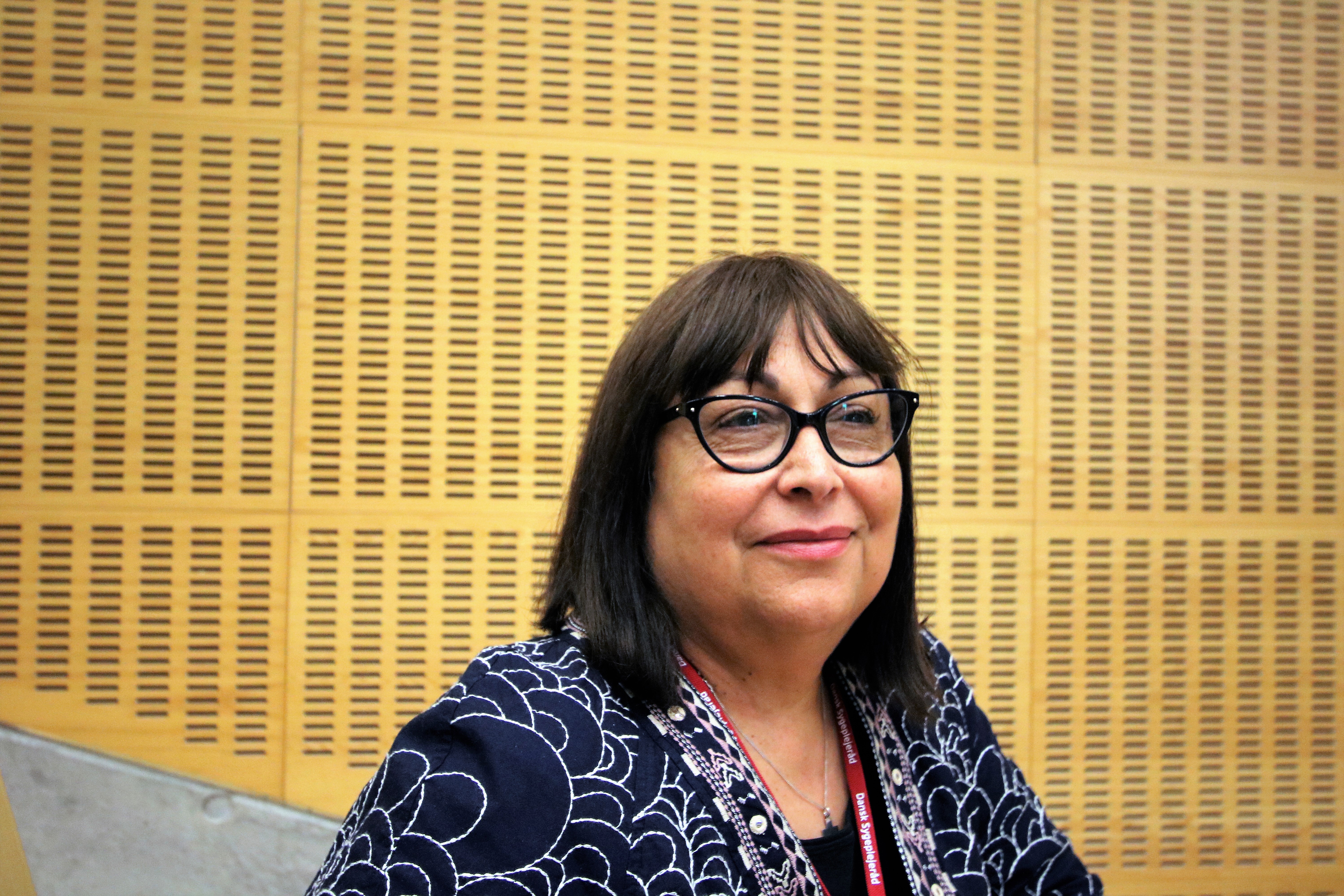 Professor Rena Papadopoulos is co-founder and President of ETNA and has experienced life as a refugee from the inside. She believes the focus should be on the resources the new residents bring, not just for their own sake but also for the sake of the host countries – because they’ll be needed.

“We have thousands of research results, medical records and reports at our disposal. How do we put this knowledge into practice in our jobs while bearing in mind that refugees can be assets to their new countries? It’s an important issue, also because populations in many countries are declining – at least in Europe – and there’ll be fewer people to meet the needs of the labour market.” Rena Papadopoulos has first-hand experience of being an immigrant. She was born in Famagusta, Cyprus. At the age of 23, she had to escape with her husband and 10-day-old son when Turkish forces invaded the island. They left their home and belongings, sailed with other refugees to Athens and from there flew to London where Rena’s brother lived. “I know only too well what it means to be unwanted in your own country and only have one desire: to get your family to safety. And for me it’s beyond comprehension that some people can think, ‘Here’s yet another boat – why don’t they just stay at home’. Fleeing to a new country is no picnic: you feel lonely and vulnerable and you miss your relatives.” Rena trained as a nurse, and at her workplace she sometimes heard colleagues complain that far too many people from other cultures were unwilling to integrate. “It became clear to me that there are good reasons for diversity and that we can’t simply adopt a new country’s systems. When we’re at our most vulnerable we stick to what we know. I wanted to use this insight, so I started training to become a nursing instructor. I really wanted to share my knowledge and experience and in this way contribute to another view of ‘foreigners’.” Education is the answer A number of delegates at the conference pointed out that nurses sometimes feel unsafe when they enter the homes of people with different cultural backgrounds. It might be that they raise their children differently than is customary in the new country. Or maybe they don’t want the kind of solution the nurse presents, causing her to doubt her own skills and training. But it doesn’t have to be that way, says Rena Papadopoulos: “I believe education is the answer. Our new nurses must be given far more training in cultural skills during their studies. If you’re well-educated you’re not afraid to raise sensitive issues. We need to send out the message that the priorities on the courses have to be changed. Students have many classes on clinical topics and new treatments. But what use is that if our colleagues don’t have knowledge and experience of how to care for a group of patients that’s growing bigger and bigger?” FACTS Today, Rena is Professor of Transcultural Health and Nursing and head of the research centre at Middlesex University. Her specialist research area is migrant groups from the Horn of Africa and Greece.

Norway: more skills for nurses in all sectors 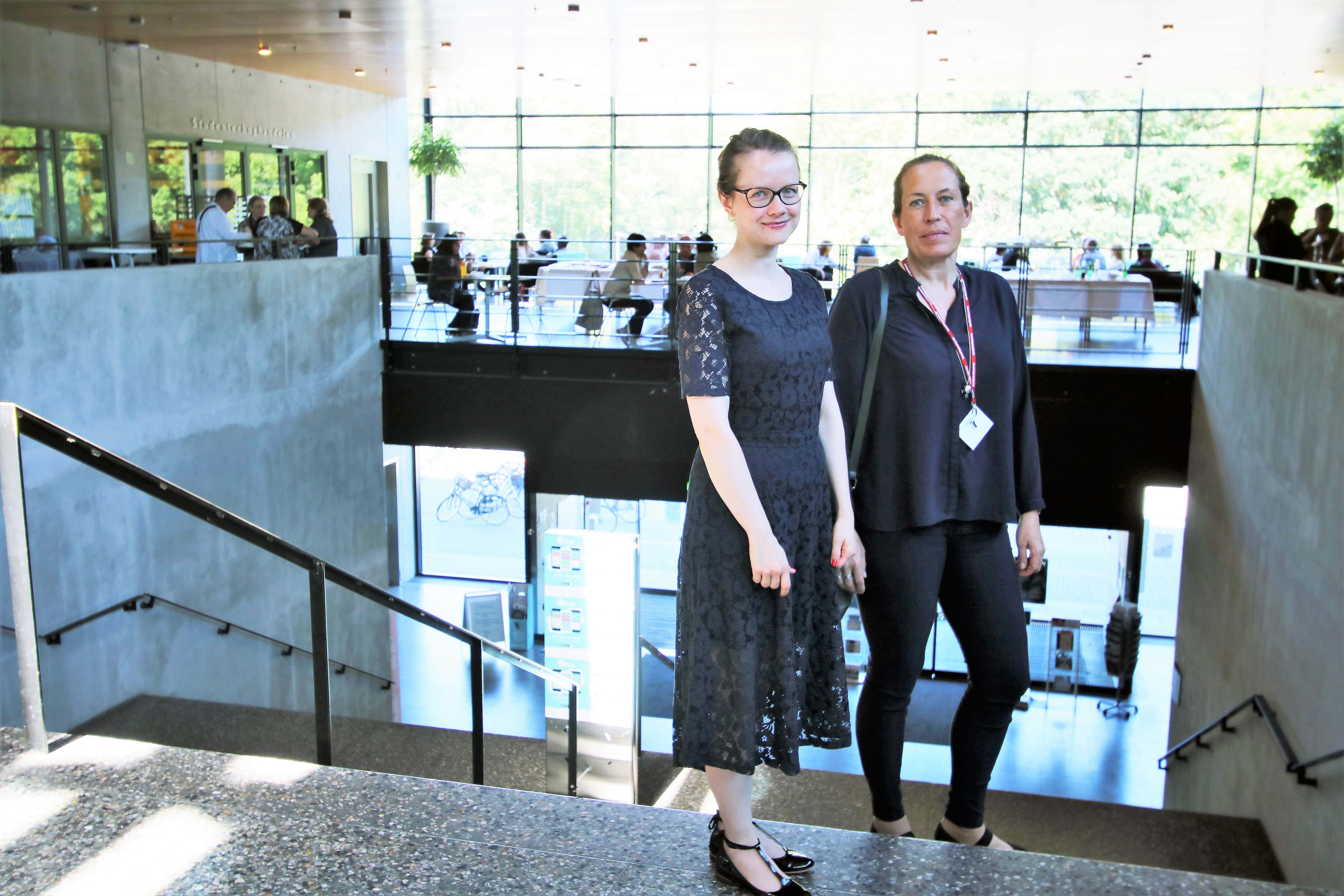 “We don’t have sufficient language and communication skills,” says NAKMI adviser Ragnhild Spilkers. She also believes there is an urgent need to train nurses more thoroughly in the concept of equality in the health service. “This is a fundamental concept in Scandinavia, so I’m happy that we’ve agreed to work together on this in the Nordic countries so we can learn from one another. It’s an obvious initiative since our health services and cultures are so similar.’ Ida Bregård from Oslo Nursing College points out that the students on the bachelor programme receive a total of 15 hours of teaching in cultural differences over two years. She believes this is far too little, and that students could also benefit from spending much more time in the patients’ homes. FACTS In Norway, 20 per cent of doctors are of non-Norwegian ethinc backgorunds. For the nurses, the figure is 11–12 per cent.

South Africa: we need to learn from refugees 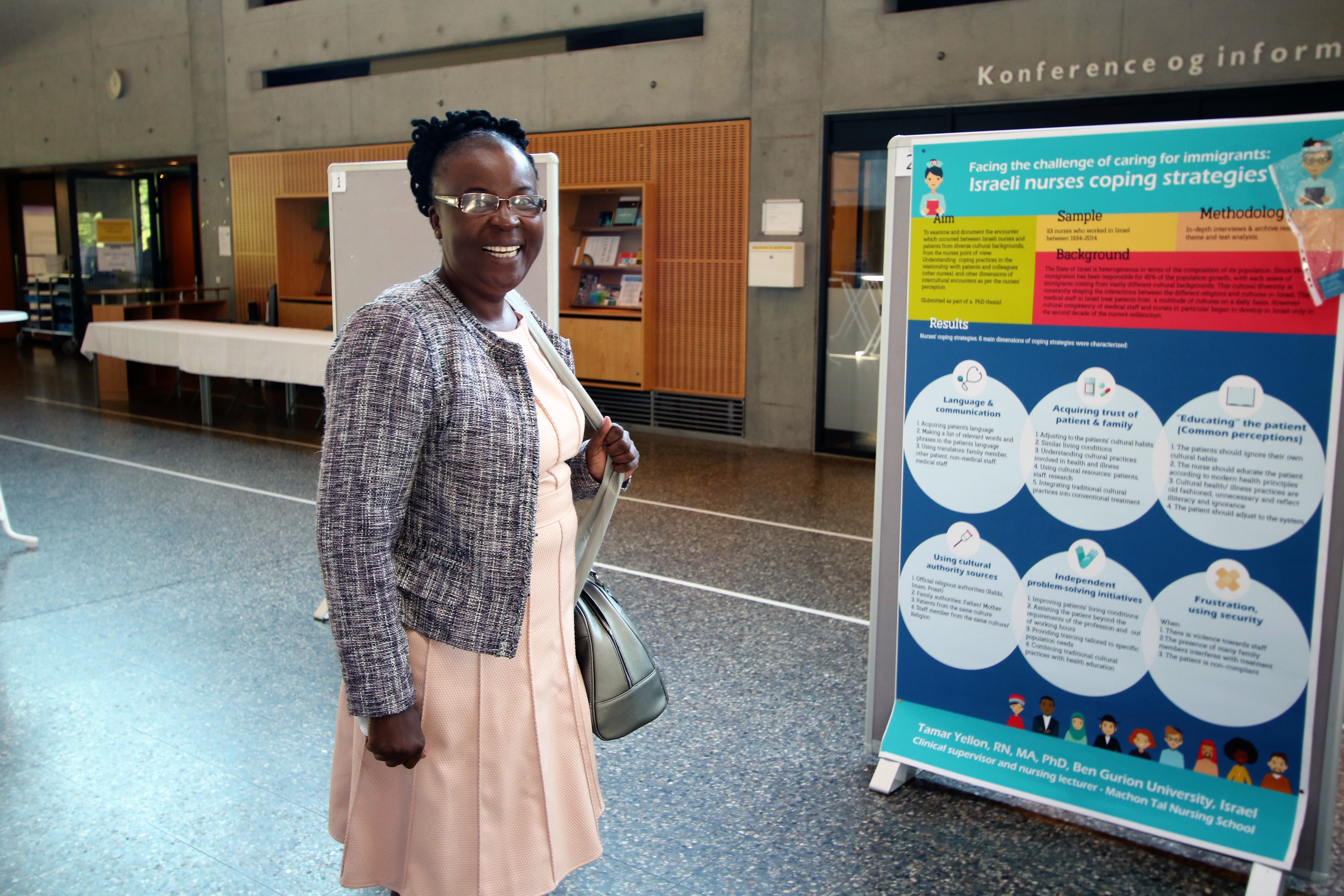 Fhumulani Mavis Mulaudzi sees close collaboration between the population and refugees as an opportunity to improve South Africa’s economy. In addition, there is a need for more trailblazers.

Fhumulani Mavis Mulaudzi from the University of Pretoria in South Africa has a vision: bringing together people from different disciplines to put the refugee issue on the agenda.

A group of dedicated people with a wide range of skill-sets can be the channel that’s needed to reach the politicians and make them take the refugee issue seriously. Not just within the health service but also to create a sense of equality among the population as a whole, which can result in a win-win situation. “We need trailblazers who assume leadership, because currently the development work is way too fragmented,” says Fhumulani. She would like to see these kinds of groups in all countries, who could then go on to build global teams. “We’re living longer, soon many people may reach the age of 100, and we can’t work until we die. And as I see it, the millennial generation isn’t ready to take over. We have to admit there’s a vacuum. We can fill it by improving integration and ensuring that the host countries benefit from their refugees and immigrants. They arrive with so many skills that we can benefit from all over the country. The question is how we can educate them to become mentors for our ‘own’ population.” Fhumulani believes integration and knowledge are the way forward. “The new residents must feel at home, and that won’t happen if we’re afraid they’ll take jobs from us. It’s true that unemployment is a genuine problem in South Africa. But our refugees, who mainly come from Nigeria, are industrious, willing to learn, and start lots of businesses. So in that way you could say that they take something from us. It is therefore vital to work together across nationalities. And this is where we need dedicated people, political will and a positive attitude from South Africans.” 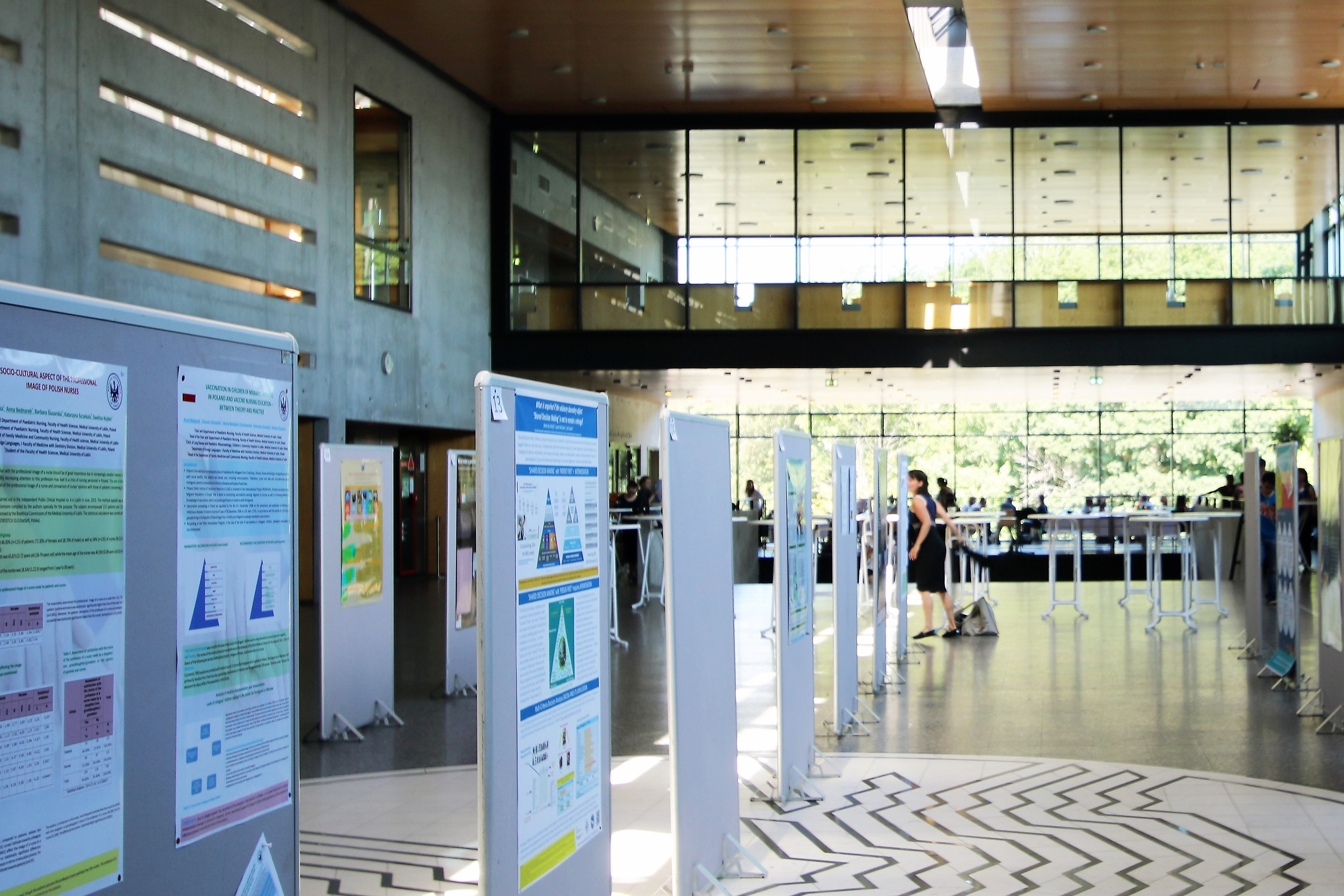 Knowledge must be shared and spread, and it will be. All abstracts, papers and videos from the conference will be posted at http://europeantransculturalnurses.eu. A new cooperation forum for the Scandinavian countries is being set up, and Dorthe Nielsen confirms that other networks are also being launched across national borders. “The challenges we face have to be articulated. And I’m so pleased that we in Denmark have the strong support of the Danish Nurses’ Organization, so we can reach the politicians. At the same time, we must continue as individuals and groups to communicate the reality we encounter every single day.”